There are millions of contracts that have been, and will be negotiated in the United States in all kinds of different industries.  Before 1677, verbal contracts were allowed under Common Law. However, there was a change when the “Statute of frauds” came about. The “Statue of Frauds” is a “measure intended to prevent the frauds that may occur whenever there is no signed, written agreement” [1].  Therefore, to prevent fraud a verbal agreement is not a binding commitment. Nowadays, written agreements are necessary with signatures unless they “performed the agreement”. This means that if the parties involved started performing their tasks as required in the contract, then a signature is not necessary.  With the rapid changes in technology, contracts can also be enforced under the law if they are conducted in an e-mail or in another digital manner.

The television industry is very particular about the way its contracts are enforced. About.com has a very interesting article written by Glenn Halbrooks that details the basics of a TV contract. In summary, the article says that the contract should contain a list of services, compensation, station rights, moral clauses, a covenant not to compete, and termination penalties [2].

Dancing with the Stars

All of these highest paid television actors are likely to be happy with their contracts. However, there are some frustrated television personalities that are upset because of the length of their contract. On March 29th there was an article written on Fox News which reported that a source closely connected to the series “Dancing with the Stars” said that some of the dancers are unhappy with the exclusivity and length of their contracts. The source claims that when they signed the contract they weren’t well-known, so they couldn’t really do much except to sign what was offered to them. But, now that they gained prominence, the exclusive rights along with its length have become a real issue for them [5]. 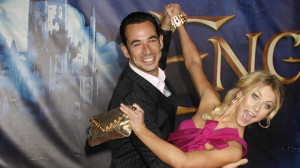 For Example, Julianne Hough got into the show when she was only 19 years old. After four seasons, she decided to split her time to pursue her music and movie career.  Currently, Hough is not a dancer in the show, but ABC still has control of what movies or other projects she can do. If ABC does not want her to participate in a specific project, Hough has to abide by their rules. As of yet, Hough nor ABC have commented about the current situation [7].

For 22 years Jay Leno has hosted the “Tonight Show” on NBC, however his luck has run out and his contract will not be renewed. Jimmy Fallon will become the sixth all time host of the 59 year old show, and is expected to begin in February of 2014. Leno’s contract is set to expire in September of 2014 and NBC has decided to give him $15 Million dollars to exit the show early. There is no word yet as to wether he will remain with the network, go elsewhere, or possibly retire [9].

On the same day of the announcement. Jimmy Fallon tweeted, “Today was one of the most exciting days of my life.” He also addressed his viewers during his current show, ‘Late Night with Jimmy Fallon’ by saying, “I want to thank everyone here at ‘Late Night.’ The staff, the crew and, of course, The Roots…I have to say thanks to Jay Leno for being so gracious. It means so much to me to have his support” [11].

Fallon will become one of the youngest hosts ever to host the “Tonight Show” at the age of 38.

Television salaries are definitely not all as glamorous as Jay Leno’s or Ashton Kutcher’s multi-million dollar contracts.  A website called PayScale had the following average salaries  a year for different positions in television [12]:

The future of contracts is uncertain

There is a lot of speculation over the future of Television and other media contracts. A very radical article from USNews.com believes contracts may go away completely. The article expresses the possibility of having robots be the Television anchors basing it on a new App.

The article talks about a new startup App called Guide that will be available through iTunes  and Android Play stores in May of this year.  The company transforms online news articles into video news pieces. This is done so viewers can pick what news they want to watch, and computerized characters (robots) can read them just like a human news anchor [14].

The startup is trying to give viewers the “TV-Newscast-feel” by having online comments at the bottom of the screen in a ticker, and including commercials between segments.  The computerized characters include a non-human Avatar, a puppy. an anime character, and they are in the process of creating more variety. The founder says this could also be a source of revenue for the company by making viewers pay a small fee to buy the different computerized characters [14].

Although this article may be somewhat of a stretch, it is clear that television will keep changing as technology evolves. As of now contracts still exist, and are enforced under Common Law.